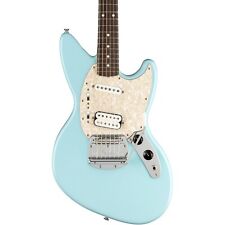 This Kurt Cobain Jag-Stang electric guitar from Fender commemorates the 30th anniversary of Nirvana’s seminal record Nevermind. Few artists in music history can be credited with changing the industry nearly overnight and continuing to influence music culture three decades after the height of their popularity. Kurt Cobain and his bandmates in Nirvana appeared on the scene in the early ‘90s as generational talents who combined raucous, heavy tones, punk-infused energy and melodic hooks to create a sound that quickly attracted millions of fans and established grunge and alternative rock as a genre with legitimate mainstream appeal.