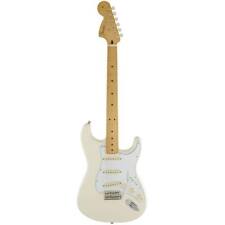 With his unmistakable, distinctive sound and his truly eccentric, innovative playing techniques and style, Jimi Hendrix has changed the world of electrified rock 'n' roll as we know it. From his unforgettable performance at the Monterey Pop Festival in '67 that put him on the map in the U.S. to his groundbreaking, psychedelic rendition of the Star Spangled Banner at Woodstock in '69, Hendrix's performances are by far the most legendary and memorable in the history of rock 'n' roll. Whether he was playing with his teeth, playing behind his back, or smashing and setting his guitar on fire, Jimi Hendrix was seldom seen without his upside-down Fender Stratocaster. Even after his untimely passing, Jimi Hendrix remains one of the most influential guitarists of all time.Paying homage to the.